Our resident photographer James Windows (aka Spike) has been out and about again. Here are more superb shots, mainly steam, with a few diesels thrown in.

This summer East Staffordshire has seen its fair share of steam hauled workings passing through on the mainline between the West Midlands and Derbyshire. Some being one off charters and also a small series of regular summer trips to Stratford. Seen below are a collection of photos of these trains along with a few more modern traction highlights. 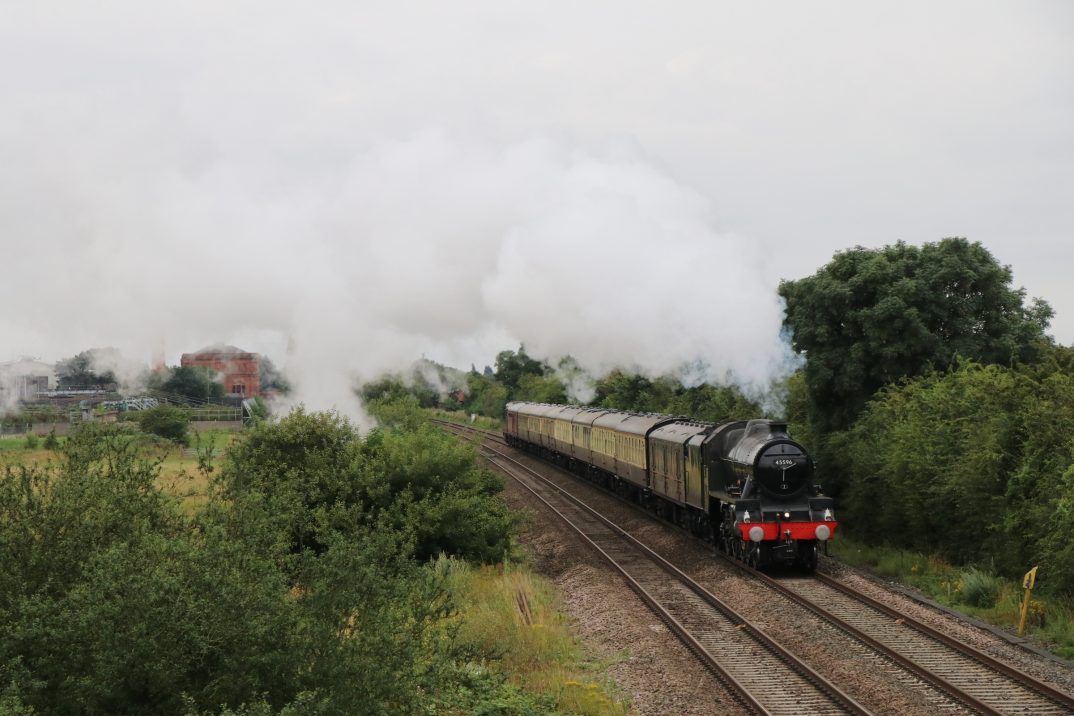 Photo 1 – After its recent overhaul at Tyseley Loco Works LMS Jubilee 4-6-0 No. 45596 Bahamas returned to the mainline for the first time in 25 years earlier this year and ran a one off charter for Vintage trains the 07:45 Dorridge to York, “The White Rose” Railtour on 27th July 2019 seen here powering away from a stop in the loop at Clay Mills to the east of Burton.

Photo 2 – West Coast Railways ran a short series of summer charter trains on a Sunday from Burton to Stratford upon Avon. On a dull and very wet 28th July 2019 the first of these ran with LMS Stanier Class 8F 2-8-0 No. 48151 passes Elford with ‘The Merchant of Avon’ charter, the 1Z50, 09:50 Burton-on-Trent to Stratford-on-Avon working. 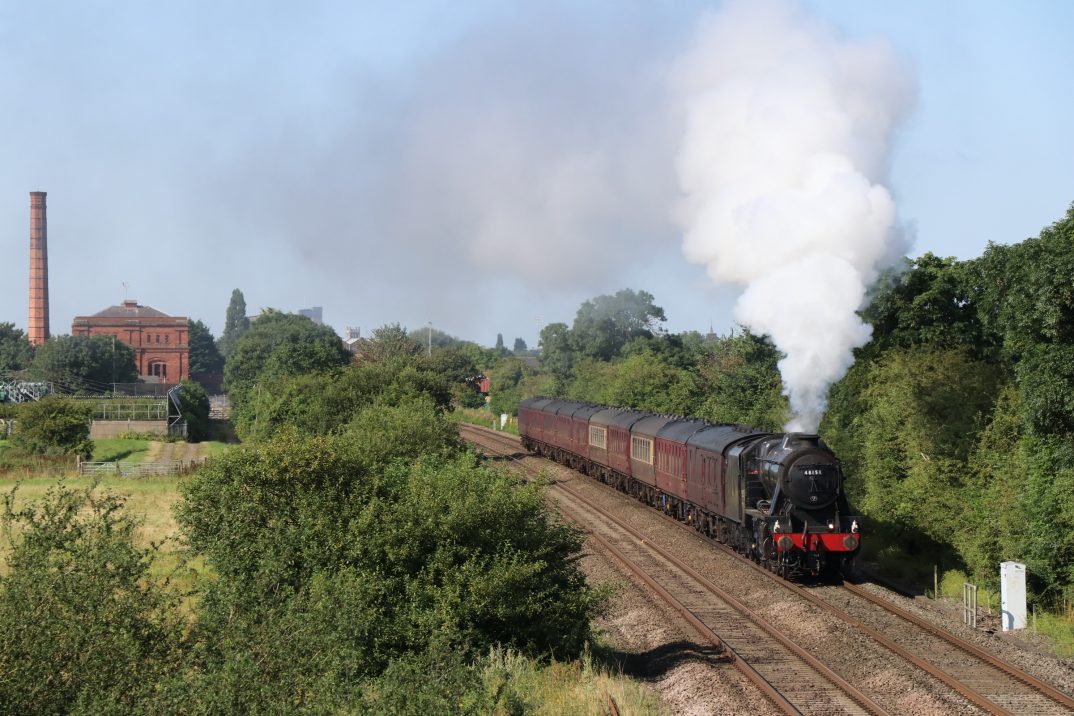 Photo 3 – By way of a contrast the next day dawned bright and sunny as West Coasts ex LMS 8F No.48151 pulls away from Clay Mills on the 29th July 2019 while working back to its home depot with 5Z53, 09.10 Burton Nemesis to Carnforth ECS from the previous days  Merchant of Avon charter to Stratford upon Avon.

Photo 4 – The second day of the short series Stratford charters four weeks later once again saw West Coasts ex LMS 8F No.48151 in use and is seen from the other side of the same bridge at Elford loop on the 25th August 2019 while working 1Z50, 09.33 Burton Nemesis to Stratford upon Avon,  Merchant of Avon charter. 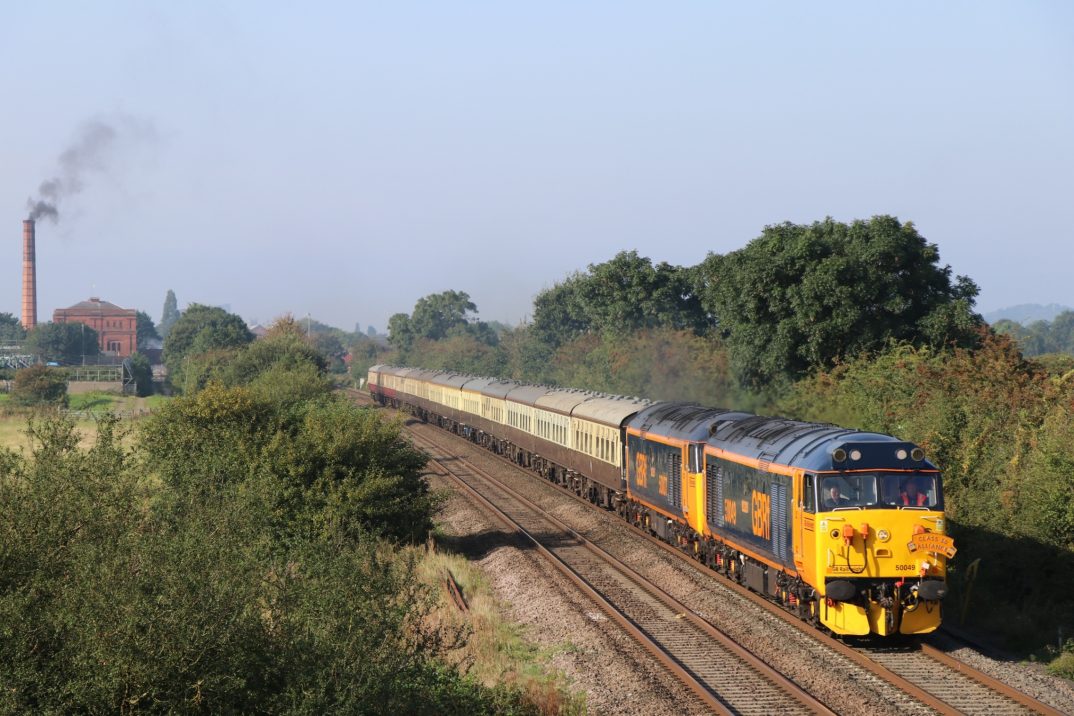 Photo 5 – GBRF liveried class 50 Nos.50049 and 50007 make for a colourful scene as they power past Clay Mills with a Pathfinder/Cotswold Line Promotion Group charter 1Z50, 05.20 Didcot to Appleby on the 26th August 2019. Clays Mills pumping station is the backdrop which had at least one of its four beam engines in steam on the Bank Holiday.

Photo 6 – Another bright and sunny morning greeted West Coasts ex LMS 8F No.48151 as it pulls away from Clay Mills on the 26th August 2019 while working 5Z53, 09.10 Burton Nemesis to Carnforth ECS from the previous days  Merchant of Avon charter to Stratford upon Avon. 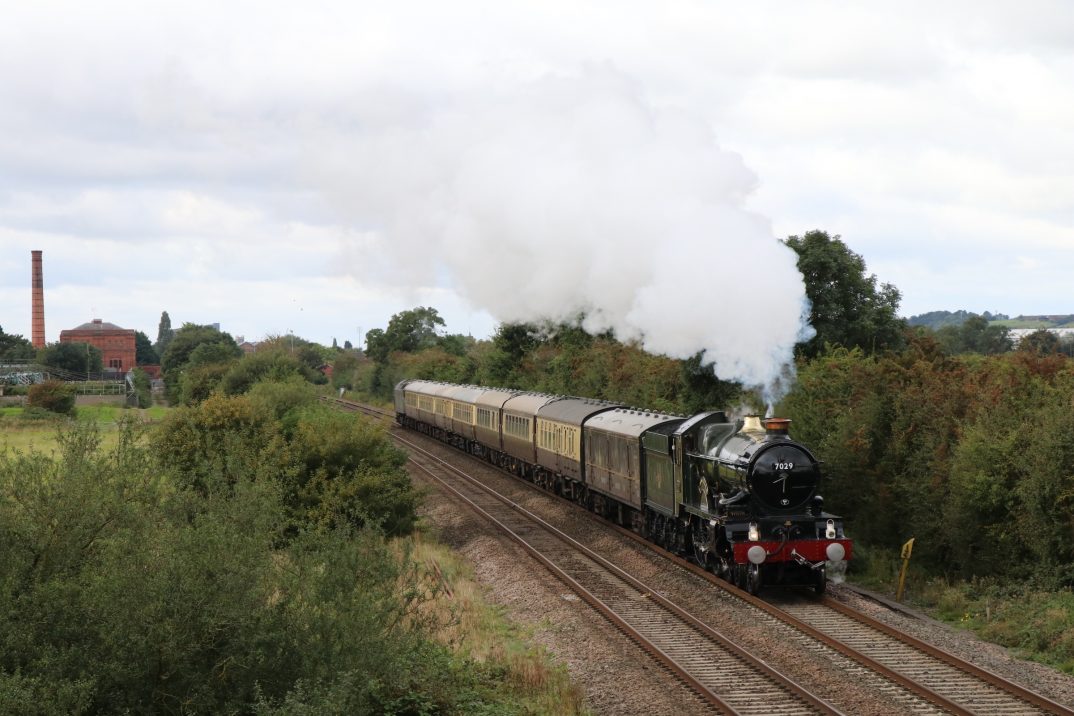 Photo 8 – Another one off charter was Vintage trains GWR Castle class No. 7029 ‘Clun Castle’ pictured shortly after departing the Goods line at Clay mills, working The White Rose from Dorridge to York on 7th September 2019. 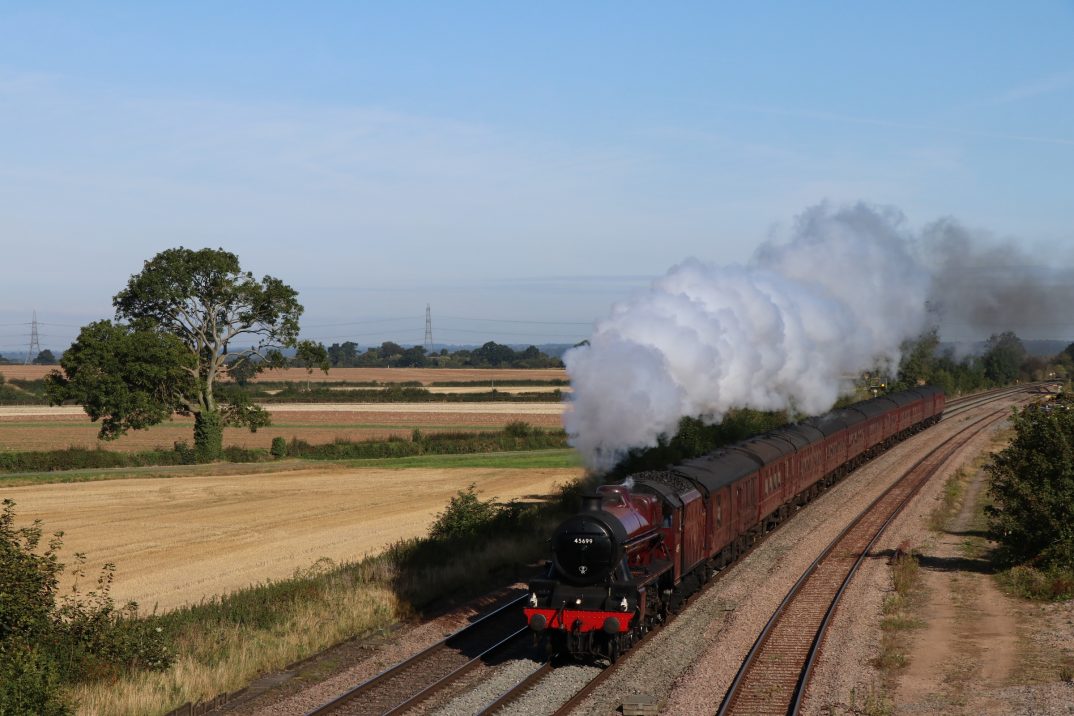 Photo 9 – The third week of West Coasts Merchant of Avon Charters saw a change in motive power and was worked by ex LMS Jubilee No.45699 Galatea photographed passing Elford loop in the early stages of its run to Stratford upon Avon with the 1Z50, 09.33 from Burton on the 8th September 2019.  Once again, the loco and empty stock returned back to its home base at Carnforth early on the following Monday morning. 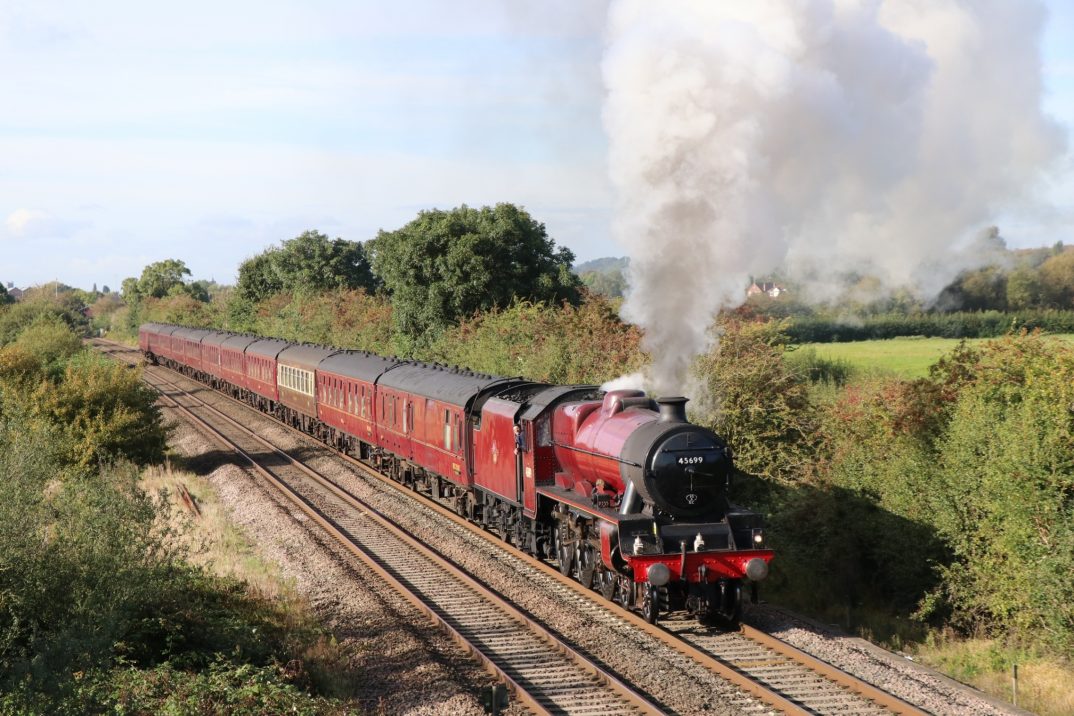 Photo 10 – The fourth and last week of West Coasts Merchant of Avon Charters saw ex LMS Jubilee No.45699 Galatea used again. Having photographed it on the Sunday morning around Elford we returned to Clay Mills on another bright and sunny Monday morning to see it head home to Carnforth as 5Z53, 09.10 Burton Nemesis to Carnforth on the 23rd September 2019. 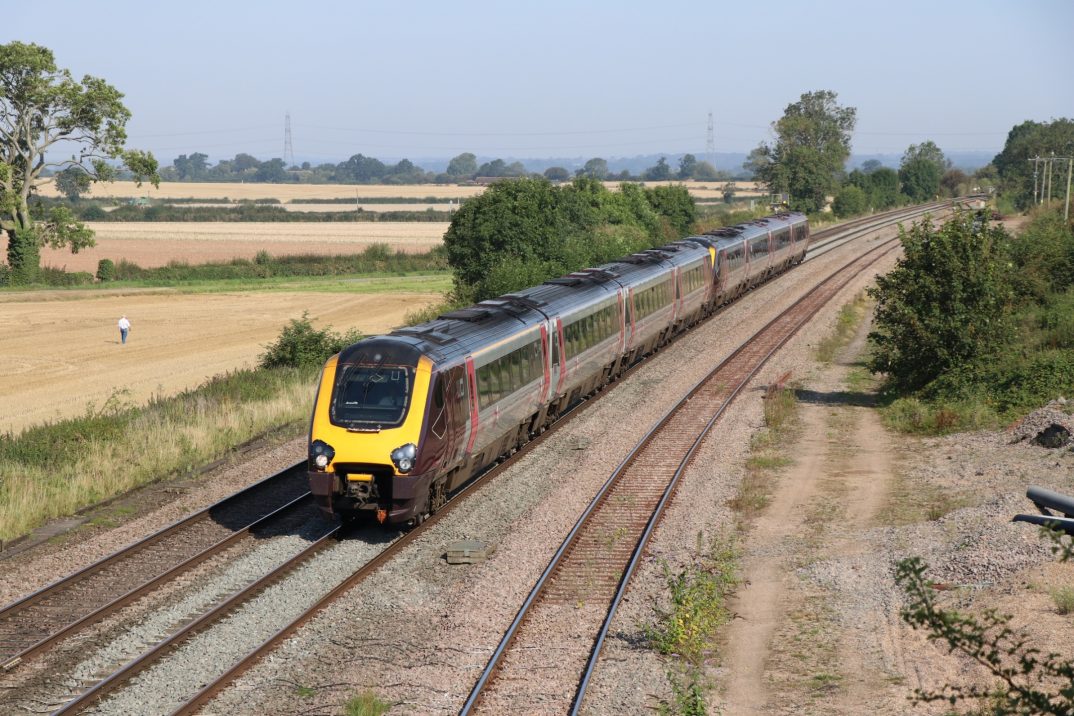 Photo 11 – The main operator along the line is currently Cross Country Trains which operates Voyager type trains on the North East to South west axis and Turbostar units on its East Midlands to West Midlands/ South wales axis. Here a double class 220 Voyager train passes Elford between Burton and Tamworth with 1V48, 08.10 Leeds to Plymouth service on the 25th August 2019. Cross country also operate a small fleet of HSTs which are seen a couple of times a day along the route

Photo 12 – The other main type of train seen is the Class 170 Turbostar unit here No.170398 powers away from its Burton Stop at Clay Mills with 1D54, 08.19 Birmingham New Street to Nottingham Service on 26th August 2019. The passage of slower charter trains, especially steam hauled, must be difficult to plan into the timetable along this busy stretch of railway which sees a passenger train approximately every 15-20mins as well as the occasional freight service.